Chefs are nice people. I make this generalization because I think it takes a nice person to want to feed people you don’t even know, much less people who have their finger poised to send out a snarky review of your food because they didn’t like the speed at which the bread basket arrived. I don’t cook for people I don’t like. So that’s why I think chefs, in general, are nice people.

In all seriousness, though, nearly all of the very nicest, most generous and kind-hearted people I have met over the past several years have been chefs. One such individual is Chef Lyndon Honda of Laulima Events and Catering. When Hurricane Iselle struck Hawai‘i last summer, the East Hawai‘i Puna area of the Big Island suffered particularly badly. Though technically downgraded to “just” a tropical storm by the time it made landfall, Iselle still toppled hundreds of non-native and precariously rooted albizia trees in the district, knocking out power to more than 2,000 homes and businesses and crushing homes and cars. The area is also home to many farms and agricultural business and the effects of the storm were devastating—destroying crops and infrastructure.

Chef Lyndon, a former Hilo resident, stepped forward to organize Project Kōkua for Hawai‘i Island, a sold-out culinary fundraiser featuring 28 Maui chefs who wanted to help their friends and neighbors on the Big Island. The event raised more than $28,000 which has been distributed via community aid organizations and in the form of grants to farmers via the East Hawai‘i Rotary Clubs.

Not long after Iselle, the Puna/Pāhoa community was again threatened by natural disaster, this time by Kīlauea volcano’s active East Rift Zone lava flow which has, since early September, been slowly and steadily heading for Pāhoa town. While the flow so far has largely remained on empty state and federal lands, the lava has claimed a house and a cemetery, crossed a small road and continuously threatens to isolate the town by cutting off the main roads leading in and out of the village. If it does cross the main road and make its way into the town proper, who knows what path it will take. Already, businesses have been forced to closed and many families have chosen to leave rather than deal with the stress of the constant threat. Lava is notoriously unpredictable and in addition to its stop-start action, it will sometimes destroy one house while flowing around the next door neighbors’, leaving them entirely untouched. 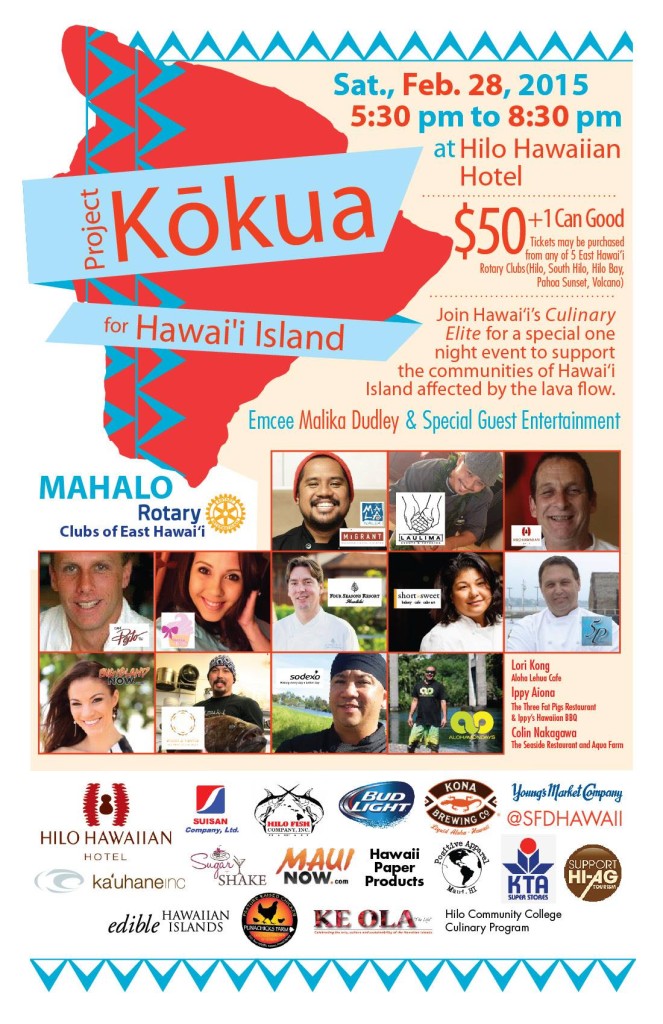 So now, Lyndon has stepped up again to organize another fundraiser, this time on the Big Island, bringing in Maui chefs to work with Big Islanders to benefit those who have gone from the metaphoric frying pan into the now-literal fire.

Project Kōkua for Hawai‘i Island 2.0 will be held on Saturday, February 28 at the Hilo Hawaiian Hotel, 5:30pm to 8:30pm. Tickets are $50, plus bring one (1) canned good. Purchase tickets through any East Hawai‘i Rotary Club (Hilo, South Hilo, Hilo Bay, Pāhoa Sunset or Volcano). The event includes a silent auction, entertainment and, of course, lots of great food from 14 chefs:

From the Big Island:

The chefs/establishments marked in bold/italics are particular favorites of Sugar + Shake. When we visit Hilo or Maui, we are always sure to stop at these spots.

It doesn’t look like we’ll be able to get over to Hilo for this event, but I’m jealous of those who can! Hilo doesn’t really do that many tasting events of this type, so this is a unique chance to experience food from who I think are some of the best chefs on the island. And all it takes is $50 and one can of SPAM® (or, you know, whatever your canned good preference happens to be).

We Ate It: Off the Wall Craft (#FoodFirst vs #DessertFirst)