Pint + Jigger is one of Sugar + Shake’s favorite haunts. We adore co-owner and bartender extraordinaire Dave Newman, and the food and drinks always satisfy. I frequently Instagram what we’re sipping on and stuffing into our faces while we’re there, but I am an incredibly lame friend and although I’ve toted the Big Girl Camera to the bar often, I’ve never gotten around to doing a post featuring P+J.

So when Dave invited us to come to a summer menu tasting, I was bound and determined to get ‘er done. (Hooray for me, since this is now my THIRD blog post of the year. I need a Time Turner.) August might seem a little late to introduce a summer menu, but trust me: The heat is on, and it’s actually a better time for these refreshing creations as the dog days drag on (and on and on and on into November, if last year is any indication).

Pint is really amping things up, with a cocktail menu that now features well above two dozen options, including the seasonal summer libations, plus perennial favorites, classics and an entire section devoted to Old Fashioneds. Formerly, the menu tended to list just the new rotation of drinks and a few signature cocktails, although you could ask for any of the old favorites, and of course the “Bartender’s Choice” was always a popular option. Since the staff was always making these things, it made sense to just offer customers a menu that showcased them. Since whiskey and Old Fashioneds are so on-trend now, but many folks still don’t have much depth of knowledge, I love that the menu lists the bartenders’ suggestions for their preferred bourbons, whiskies and ryes. The whisk(e)y list is, in fact, 240 strong now. (I neglected to take a photo of the impressive spread, but @melissa808, as always, is more on it than me; you can see the list in her coverage of the new menu.) They’re very competitively priced, so if you have a hankering for an education, you should stop by; ask for recommendations to suit your palate, or try something you wouldn’t otherwise. Dave says more and more of their customers are asking for Scotch, so they have a lengthy list of those. (Peat. Ew.)

The order of the tasting, and this post, introduced the lighter, I-just-walked-in-the-door-please-serve-me-something-to-make-me-stop-sweating drinks first, followed by the more savory, and ending with a series of P+J’s absolutely delightful cold brew cocktails. We’ll also take a pause for food, which is also served generously and currently in a summer menu incarnation.

On the left we have the Bright and Sunny, Pint + Jigger’s homage to Kō Hana Rum and (former P+J bartender, now agricole rum distiller) Kyle Reutner (it also features Kyle’s Hawai‘i Bitters Co. liliko‘i bitters). It’s a play on the classic Dark and Stormy (dark rum + ginger beer), but obviously much lighter and brighter, utilizing Kō Hana’s “Kea” expression (the white agricole) rather than the traditional dark rum—so it also has some of that lovely funk that I love about Kō Hana agricole, plus the tartness of liliko‘i.

On the right is the Brrr-ito, which is the kind of thing Dave sets in front of me when he wants to torture me. We all know I’m not a fan of beer. Dave knows this and likes to sneak it into my drinks to see what I’ll do. Usually I make faces. The Brrr-ito has proven to be extremely popular at P+J while in its pre-menu phase, and it is, I admit, a great summer cocktail. If you don’t mind the beer aftertaste. (It is a pretty faint aftertaste; another taster also confessed she doesn’t care much for beer, but didn’t feel this was too beer-y.) Dave replaced the rum of a traditional mojito with Hoegaarden Belgian white ale, which makes it lighter and less sweet, and delivers a crisp bite that rum doesn’t have.

The Batanga comes from Mexico. Dave took a trip to Tequila, Mexico, where he learned to make this cocktail, created in the 1950s by Don Javier Delgado Corona, at La Capilla, Corona’s bar. It’s crazy simple—just tequila (P+J uses Maestro Doebel, which is much fancier than what they use in Mexico), lime, Mexican Coca Cola and a salted rim—but the key, Dave says, is that you must stir it with a knife. (I asked, “Like, a butter knife, or a knife-knife?” Cue brandishing of large knife and “Thaaawt’s naaht a knaaayfe” jokes.) You’re supposed to use the same one that you used cut the limes that go into the drink. Pint serves up the Batanga with a plate of cucumber slices, dusted with sea salt and Tajín, which is a tangy chile-lime salt that I love. (Really. I bought the giant Costco-size bottle. I put it on everything. Meats. Eggs. Popcorn. It rocks.)

The next pair are still in the “refreshing” category, but perhaps better suited for your second drink, now that you’ve eased out of the heat. We visited P+J a couple weeks before this tasting, and they’d already quietly introduced the new summer menu. I spotted the Baby Maker (left) on the menu, and I wanted it, but there was no way in hell I was going to tell Dave “I want a Baby Maker.” It was quite as delightfully tasty as I suspected it would be, with vodka, citrus-infused in-house, and rhubarb simple syrup. The silky texture and foamy top comes from shaking the drink with egg white. There is, as you probably guessed, a story behind the name, but no, we don’t know for certain whether it actually delivers on its avowed function.

The G’Mornin Sunshine, on the right, is also served at brunch. (LOVES me some P+J brunch! Breakfast Sammie, yes, please! It comes with waffle fries, which is the reason for half my enthusiasm.) At brunch, however, the G’Mornin Sunshine comes with a shot of orange juice “because we care,” the menu informs us. The drink is an interpretation of an Old Fashioned (so you’ll find it under that section of the menu). It’s a perfect breakfast Old Fashioned, orange-y enough that you can claim to be virtuously looking after your Vitamin C levels when consuming. (Note: Pint starts their everyday brunch schedule, that’s seven days a week, on September 8.) 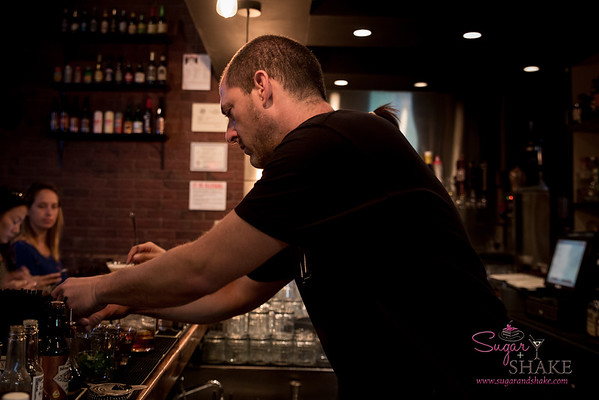 Now we have the savory drinks.

The Prime Thyme is a Negroni variation with thyme-infused Aperol, gin and Lustau East India Sherry. I’m a Negroni fan, so this was totally right up my alley. Like other Negronis, the Prime Thyme is just sweet enough to be a pleasant drinking experience, and leaves that delightful bitter finish from the Aperol. (Not everyone likes that, though.) Thyme always makes me think of turkey, so I kind of wanted a turkey sandwich to go with this drink. So since we’re talking about food…

The Summer Skillet features fresh summer vegetables (ours had zucchini, eggplant, squash and tomatoes), layered with mozzarella and topped with panko, basil and balsamic vinegar, and baked in a cast-iron skillet. It’s served with crostini, but you can just dig in and eat the veggies like a mini meatless lasagna. It’s a riff on a Caprese salad, but served hot. This was my favorite of the new menu items.

The more carnivorous will appreciate the Triple B Sandwich, which is stuffed with 16-hour braised brisket liberally doused with Kansas City-style BBQ sauce, then topped P+J slaw and fried kale. 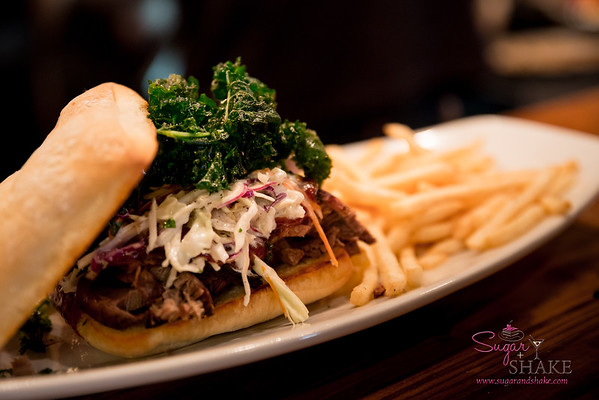 The Roasted Pork Tenderloin comes served on a bed of roasted cauliflower and haricot vert, topped with cauliflower gravy and port cherries. The portion is more modest than the heaping monster Triple B sandwich, but in my opinion, it’s made up for by the rich flavor. I think this dish goes nicely with the Prime Thyme, and like that drink, it’s a bit more autumnal than summery. But that’s OK. The weather doesn’t know what season it wants to be, either. 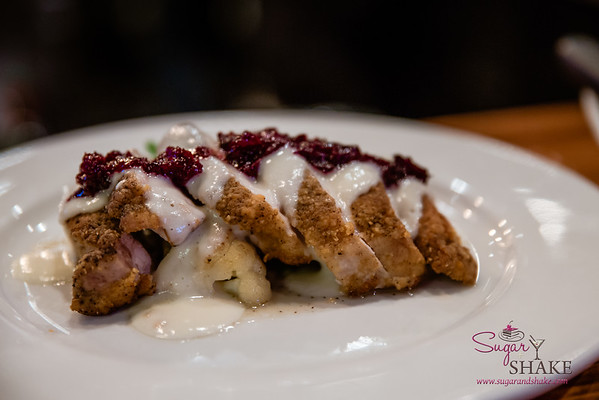 There’s also a Market Fish with Mango Salad (which tasted great, but I did a lousy job of photographing). A pan-seared filet (whatever’s fresh that day; I believe ours was mahi mahi) is served up with a side-salad of mixed baby greens and a mound of fluffy couscous and topped with a mango salsa. I wasn’t brought up to eat fruit with meat, so I tend to have a hard time getting excited about fish or meat that comes with a fruit salsa or sauce, but this was so refreshing and flavorful, I would actually order it for dinner next time. One of my favorite things about P+J is that their food menu offers more than just standard fried bar fare. You can get fantastic vegetable dishes (Shake’s a stalwart fan of their Brussels sprouts) and fresh fish that’s not battered and fried. (Although I do love their fish & chips…)

Let’s go back to the drinks. The Shambles was the first one I tried when we came earlier and the summer menu had already been rolled out. It caught my eye because it’s full of all sorts of things I love: bourbon, Pimm’s, Punt e Mes, St. Germain and orange bitters. It’s a little sweet, a little bitter, more fruity and floral than herbaceous (in case you are feeling Negroni-ish, but aren’t that into gin).

The New Old Fashioned is meant to evoke the flavors of a traditional Old Fashioned, but in a modern way. It uses house-made orange marmalade and Cherry Heering in place of muddling oranges and cherries. It has a sweeter, less aggressive taste than the original incarnation of the drink, so if you’ve tried an Old Fashioned before and didn’t take to it, try this one out. 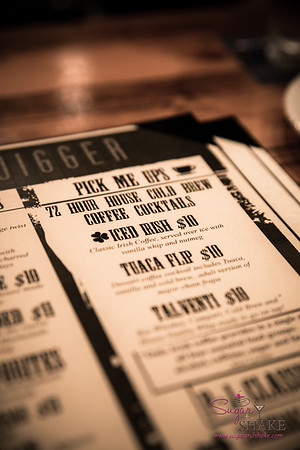 Finally, we come to the closers, the cold brew cocktails. (Of course, if you’re stopping in for brunch, you can start with these!) P+J’s cold brew is steeped for 72 hours, which results in a crazy strong, very delicious, surprisingly smooth coffee. I do not recommend drinking three sample-size cold brew cocktails and then a full pint glass of cold brew. That wasn’t me, that was Shake. He was very awake at 3 a.m.

The Talventi has been on the menu for quite a while; if you follow me on Instagram, you’ve probably seen it make repeated appearances. Made with rye whiskey, Campari and P+J’s cold brew, it’s almost always my last drink of the evening and always, always my first (usually my only) for brunch. It comes topped with their house vanilla whipped cream, which is sinfully delicious. Shake likes his cold brew black, so I get to have his for a double helping of cream. Yippee!

The two new additions to P+J’s cold brew offerings are the Iced Irish, which is the classic Irish Coffee, but made with P+J cold brew and topped with their vanilla whip and a little dusting of nutmeg. (Ignore the Sam Adams branding on the glass…it’s really Irish whiskey in there. This was a tasting portion in a shot glass; the real thing comes in a regular pint glass.)

The Tuaca Flip is a dessert replacement. P+J calls it their boozed up “adult version of a major chain’s frappe.” It doesn’t have the same consistency and iciness, but it’s definitely got that sweet coffee taste going. I love it.

So that’s it! If you haven’t been by Pint in a while, stop in, get a refreshing summer drink and explore that whiskey list.