I am a huge spice wimp. I don’t put chili flakes on my pizza. I love ma po tofu and spicy ‘ahi bowls, but they make me cry. I *never* play the Russian roulette game that is partaking of an order of shishito peppers. (I am always, always, always the one that ends up with the one spicy one.) But I make a mean batch of chili pepper water.

CPW is a beloved Hawai‘i condiment. You’ll find it on tables from humble mom-and-pop diners to white-tablecloth, fine-dining establishments. What they have in common, too, is that they mostly make their own. I’m not even sure if I’ve ever seen a commercial-brand bottle of chili pepper water for sale. You will, however, find them at farmers’ markets or little local shops, usually made by some farmer or aunty from their family’s “secret” recipe.

While I was working at the Red Barn Farmstand, our farmer announced that she’d discovered a bunch of chili pepper plants left over from the previous farmers and asked what we wanted to do with them. “We could make chili pepper water to sell,” I suggested.

Which led to a bunch of glass bottles lined up on my desk and a vague fear that they might explode.

Far from the strangest bunch of project bottles I’ve had sitting around brewing on my desk, but possibly the ones I’ve had the least interest in consuming when they’re done… But these aren’t for me, anyway. Let’s see who comes through for us, @hanaranch or @cheflyndonhonda! #sundayproject #scaredofspicy

Shake had attended a food event in Hāna once and while there bought a bottle of CPW from, yes, a little old local aunty. He swore it was the best CPW he’d had, and he hoarded it in our fridge. He found a recipe from Hāna Ranch, which he hoped would yield a similar batch. 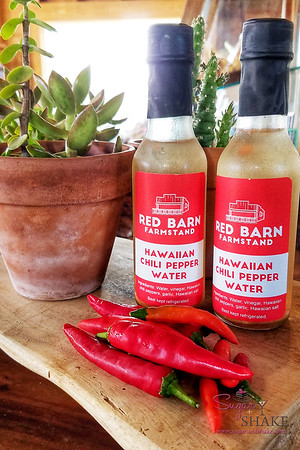 In general, you can pretty much classify CPW into three categories: whole-pepper, chopped-pepper and shoyu (soy sauce). Some recipes, like the Hāna Ranch one, use whole peppers. The resulting CPW may have a lighter color (depends on how long you let it mellow) that’s more golden. Chopped-pepper recipes result in a vivid orange/yellow color. Shoyu versions can use either chopped or whole peppers, but they’ll end up brown because of the addition of shoyu.

So, for my test batches (the winner would end up the Red Barn Farmstand’s signature CPW), I made the Hāna Ranch recipe in both plain and shoyu versions. I also solicited suggestions from chef friends. Our buddy Lyndon Honda on Maui came through for me, although his instructions were pretty vague: “Blend chili peppers in food processor with some garlic. Then add to water, a little white vinegar (this will preserve the water), Hawaiian salt. Bring to boil and pau!” Yeah. The point of asking you cheffy folks was to get some SPECIFIC instructions! Having been unsuccessful in prying any actual measurements out of Lyndon, I forged ahead anyway.

Fail. They all came out way too watery and flavorless. The Hāna Ranch version had no heat at all. For Round Two, I decided to coarsely chop the peppers for that recipe and boost the vinegar to water ratio all around.

Round One: Failure. On to Round Two: less water, more vinegar, chopped chilies.

Improvements all around! The Hāna Ranch version never lived up to Shake’s dreams of the aunty’s recipe, but it wasn’t too bad. The Red Barn crew felt the shoyu version was too salty. The winner was the “Lyndon-style” batch, at a 2:1 water to vinegar ratio which, in addition to having the best-balanced flavor, was the prettiest.

I’m no longer working at the Barn, and it’s on hiatus while new management takes over, but you can try your hand at making your own batch of CPW. This recipe yields a fairly hot, very garlicky and vinegary flavor.

Despite following a recipe, each batch will always come out a bit different, especially when it comes to the heat level — the peppers tend to vary in size and heat, and it’s hard to know what to expect. (I’m sure as heck not going to taste test them!) Ten is a rough number; you could use as few as 7 or 8 jumbo ones, or as many as 15 smaller ones. I generally eyeball it and try to get about one and a half tablespoons of blended pepper.

Be sure to make this in a well-ventilated kitchen. When you open the pot lid, watch out — it’ll waft out a suuuuper peppery bunch of vapors. I always sneeze a lot while making this stuff. Makes my nose itch.

Whirl peppers and garlic in a food processor; stop before you get to the paste stage — you want the chili pepper to be minced (a few larger pieces are fine, and if you prefer less heat, keep the pieces on the larger side); garlic should be a mix of minced and larger chunks. Combine mixture with salt, water and vinegar in a large pot. Cover with a lid, bring to a boil, then remove from heat. Allow to cool. Store in clean glass jar or bottle and allow to “marinate” for 2 to 3 days in sunlight, shaking daily. Store in refrigerator to preserve flavor and color.

Sprinkle on anything that strikes your fancy — eggs, meats, vegetables, whatever you would put hot sauce or seasoning on.

* Use the red (or orange) peppers only, not green.