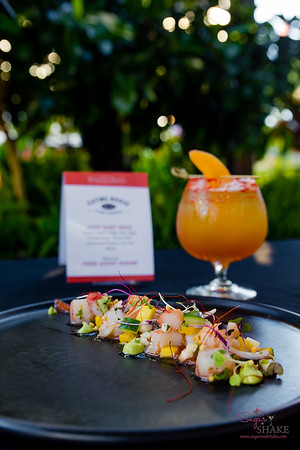 The International Market Place in Waikīkī has deemed July Mixology Month at the shopping center. Various restaurants in the collection will offer special cocktails, each highlighting a selected spirit-of-the-week, paired with a featured dish. Each Thursday, bartenders will battle it out for top honors (and a cash prize). This week, I attended a media preview showcasing some of the drinks and dishes. (Haven’t been to one of these in a while! It’s nice to have some fun instead of just working.)

If you don’t have it in you to go every week, I would encourage you to go on a week highlighting a spirit you don’t usually drink. Let yourself be surprised by a new taste!

Here are the weeks: 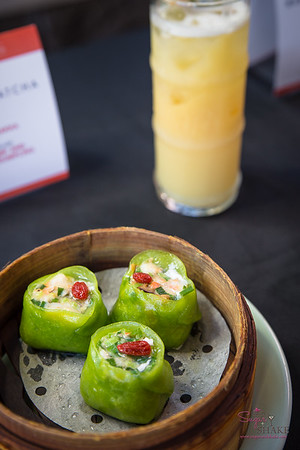 And the participating restaurants:

I love when media events set up an area with all the nicely plated dishes and informational signs. It’s especially nice when it’s a tasting event where what we get served really doesn’t look as nice as what customers will get in the restaurants or give you a true idea of the actual portion size.

Week One (July 1 – 7) will feature vodka. Eating House 1849 brought out their Drop Baby Drop (top of the post). Li hing mango is such a summer taste to me, and this drink is like drinking boozy li hing mango. This would make a very happy beach drink. We were served Eating House Shrimp and Pickled Mango to go with it, a very refreshing cool dish.

Yauatcha wasn’t serving up their vodka drink, the Hakka (ELYX vodka, junmai sake, lychee juice, lime, coconut and liliko‘i), but they did have the Shrimp & Chive dumplings (above). I, however, got distracted by talking to some folks, and didn’t circle back around to their table until after these ran out.

On the whole, based on the descriptions, Woodley’s drinks sound like the most adventurous, with complex flavors and interesting combinations. They also sound well-paired with their accompanying dishes; the Week Three whiskey drink, for example, uses Japanese whiskey, the smokey, peaty flavor of which is echoed in the International Smoke’s Jerk Chicken it’s meant to go with. Andrew also went full-out with the décor on his table and had the nicest display of all the participants. Not that it was a competition. But I’m a sucker for a good-looking backdrop. 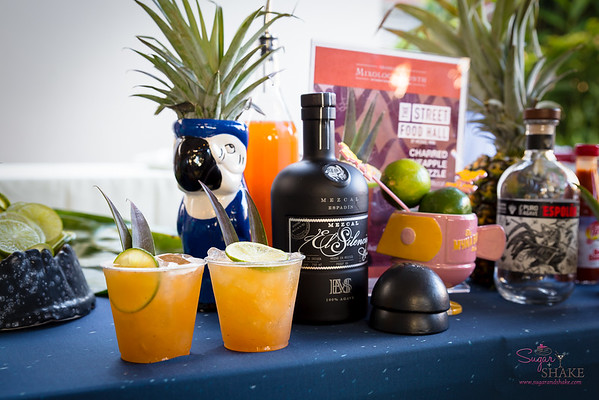 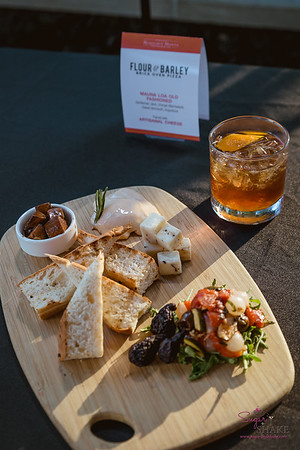 Speaking of Week Three (July 15 – 21), the first drink I sampled was Flour & Barley’s Mauna Loa Old Fashioned (Gentleman Jack whiskey, orange marmalade, sweet vermouth, Angostura bitters) my first drink. It was refreshing for a hot summer day, and on the sweeter side. Their cheese board was nicely represented on the set-up table. There’s a soft cheese spread, cheese cubes, baguette slices, dried figs and a little mixed vegetables and olives. I skipped the cheese spread they were sampling due to (overshare alert) dairy issues.

Flour & Barley’s Week One vodka drink (Makapuʻu Mule) wasn’t being sampled out, but sign me up for that, because a) I’m a vodka fan (yeah, I know I said try new things) and this is being made with Tito’s vodka, which I like quite a lot, and b) the food pairing for this one is the Flour & Barley Garlic Cheese Bread, which I can only wish came with more pieces in an order (and that I didn’t end up garlic- and dairy-related regrets later). Love that stuff.

I didn’t try it myself, but the Week Three Ginger Smash from Yauatcha was popular. I’m told it was a sweeter drink, with a nice, fresh ginger flavor. I did snag a Char Siu Bun, which goes with the drink and was amply stuffed with char siu. 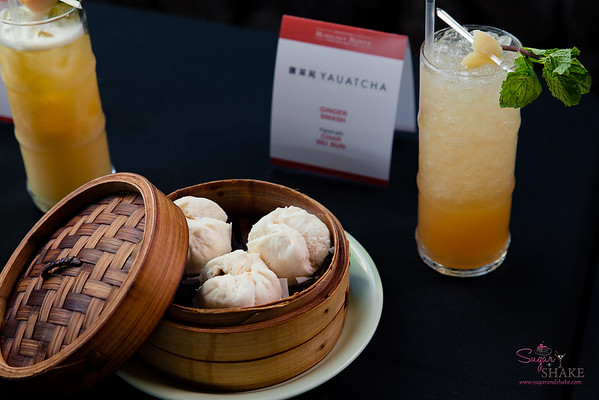 The photo set-up table included items that weren’t being sampled out, such as the Classic Steak Tartare and Bourbon Sunset from StripSteak. I would have liked to have tried both of these, which are also a Week Three feature. 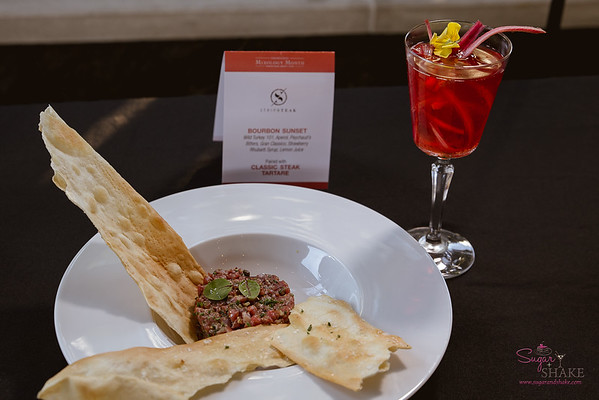 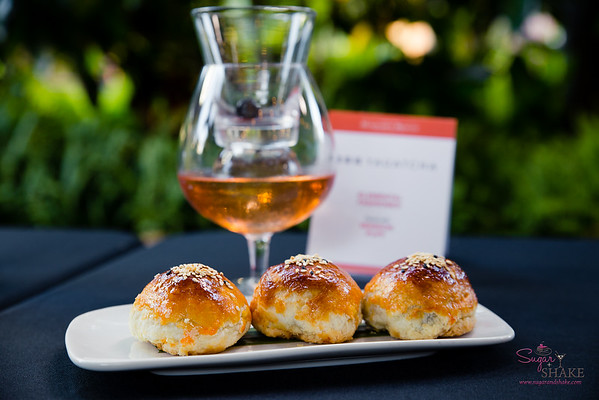 Drinks served with a smile by Skipper Bonano of Yauatcha and Raymundo Delgado of StripSteak.

I made sure to try the dessert item early on (because of course I did), and StripSteak’s Week Four (July 22 – 31) rum pairing went perfectly together. The Rise N’ Coco (Flor de Cana rum, Cocchi Americano, vanilla creme de cacao, coconut horchata, Bacardi), packed a punch, but the Warm Chocolate Lava Cake is so intensely chocolatey, that it balances well.

The IMP has made it blessedly easy to park at their facility, so it’s worth a trip down there to check out the eats (and shopping). They’ve got a couple of special promotions going on as well, a #MixYourStyle photo contest, which involves taking a photo of your Mixology Month cocktail and food pairing AND your outfit of the day to win a $100 gift card. I am totally not an “OOTD” kind of gal (I mean, I do wear a different outfit every day, but you know what I mean), so this is all yours. Go for it. You can also save up your food and shopping receipts and turn them in for a cute beach bag with the IMP’s iconic banyan tree. All the details are at their website.

Disclosure: I was invited to attend this tasting event as a guest of the International Market Place. No financial compensation was received for this post and no representative from the host company/restaurants was given the opportunity to review or comment upon this post prior to publication.